"I am attracted to art that has that sense of humour and tension between seriousness, ambivalence and play." Gandalf Gavan, (Phong Bui, Brooklyn Rail, May 2010)

Gandalf Gavan is trying to keep things simple these days.  He moves quickly, almost joltingly around Globe Dye Works, but it is clear that when it comes to art making, Gavan is able to trust his instincts.  Upon entering the exhibition space he had an immediate attraction to a big tub of zeolite and decided to hone right in. 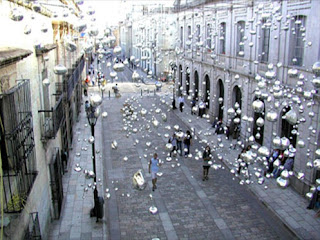 Gavan's ability to transform a space without entirely taking it over is due to his utilization of surroundings without nullifying them.  He invites his media to employ light as an additive rather than a costume.  His past work has involved many media, notably here are neon and mirror, and often express his interest in light.  In terms of the zeolite, he is excited about its quality of refracting light as well as its ability to shift our perception of the material. 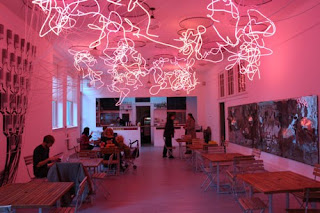 Zeolite, a water softener, has been a focus for many visitors into the Globe Dye Works.  I would credit it's luring texture as it's most seductive attribute, but its constant shifting of color and light have been just as powerful in honing us in.  Gavan filled a baggie of zeolite to bring back to his Brooklyn studio; I can't wait to see what he does with the stuff.

Posted by Catagenesis Exhibition at 5:22 PM