In hopes of gaining a better understanding of what took place at Globe Dye Works (primarily indigo dyeing), I recently attended a workshop at the Temple Art Gallery about natural dye processes.  Elissa Gwen Meyers and Mira Sophia Adornetto (of BlueRedYellow) were wonderful teachers, very energetic and open about their processes.

BlueRedYellow is the name of their design/dye house (based in South Philadelphia), but these are also the only colors with which they dye.  As Elissa explained, secondary colors are created only through an overdye process (you would dye something first blue and then yellow to create green, and so on..).  Apparently this is for chemical reasons, the dye adheres to the fibers on a specific basis and mixing colors in the dye vats would mess up the fundamentals.  In this way, they described creating color in textiles to be very different than mixing paint. 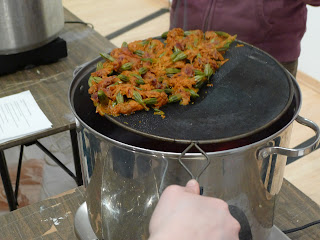 In this workshop, our red dye was made of boiled madder (a plant root).  We had two shades of yellow - boiled marigolds made a bright yellow and boiled onion leaves created a deeper golden hue.  Creating indigo, on the other hand, is much more complex.  Indigo pigment, madder root powder, wheat bran and soda ash are all added to a big bucket of warm water; it is stirred (daily), covered and left to ferment.  The indigo we were using had been prepared at the previous workshop and had been fermenting for two weeks.  It had a pungent fishy smell.  Actually, the whole gallery had a deliciously strong odor with the boiling onion leaves, the sweetness of the marigold heads and the rich earthy smell of the madder root all mingling with that fishy indigo.  At some point during the workshop a hungry boy came in to see if we were making soup. 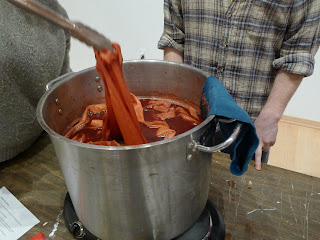 With the red and yellow dyes, the chemical process that causes adherence happens to the fabric before it is dyed.  The fabric is scoured (cleaned) and then mordanted (there are hundreds of mordant processes, but basically this is where the soda ash comes in).  So the dye vats consist of only the plant and a lot of hot water.  With indigo, the soda ash is in the dye and the fabric does not need mordanting.

And we were ready to dye.  We began by arranging our fabric in different ways to cause resist (areas where the fabric would not pick up dye); there was a lot of good old fashioned tie-dying (by twisting and tying the fabric so the folds resist the dye), stiching (so that the sewn thread would be the resister), as well as screen printing gum tragacanth (Mira and Elissa get this from a local bakery).  With the red and yellow we put the fabric in the vats, agitated it some, removed it and rinsed it vinegar.  And again, the indigo process was more complicated/interesting.  The dye itself is a muddy greenish color (except at the top, where air has interacted with the dye), and it is only when it mingles with oxygen that it becomes indigo in hue.  The oxidation process of indigo is absolutely beautiful to watch; we would pull out the greenish fabric and watch as it would slowly transform into a rich blue color. 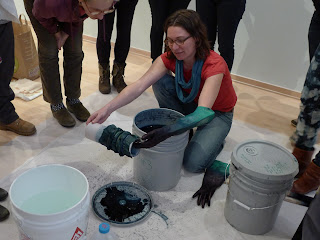 There was also some expression of the heartiness of indigo dye - it was the only color that we didn't have to measure our fabric usage of (it seemed impossible to dilute), and everyone was most interested in dying with it.  Mira and Elissa were giddy about the strength of one particular batch - apparently the fermentation process was rapid and very successful. 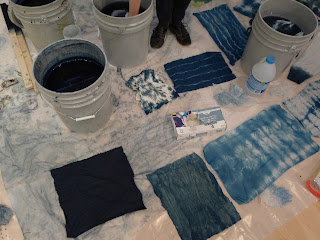 We were working on a plastic tarp that was partially covering the gallery floor.  The area was quickly covered with drying fabric swatches, and we had to carefully navigate the space by hopping over dye vats and fabric.  I had a great deal of sympathy for the nervous gallery guide who was constantly wiping indigo splashes and footprints off of the gallery floor with a sponge.

Indigo is one complex color, and I can only imagine the kind of beautiful messes that must have been made at Globe Dye Works. 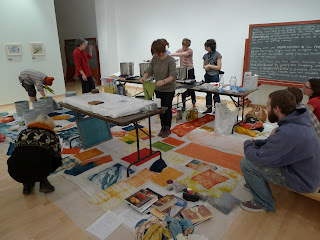 Posted by Catagenesis Exhibition at 5:48 PM